The BBC reports on a unique garden that is helping Canadians  break a taboo that exists in many societies. It is allowing parents to talk openly about miscarriage. After Debbie Balino gave birth to her first child, she and her husband looked forward to a future with a large family. It was something they had always dreamed of. But as they prepared for the arrival of their second daughter the problems began. "I lost Victoria at 21 weeks in 2013," remembers Debbie.

That was her first miscarriage, but she went on to experience eight more over the next five years.

A miscarried child can exist in a kind of limbo, thinks Debbie.

"They are too young for a funeral, but too old to ignore they existed. We didn't know where to place Victoria, so we just left her in the hospital. She was actually referred to as 'biowaste'. It broke my heart in pieces."

Debbie was too upset after losing Victoria to think about things like funerals. But with her second miscarriage - William, after 16 weeks - came a revelation. A doctor told Debbie about a place nearby called the Little Spirits Garden

The Little Spirits Garden is a landscaped garden dedicated to the memory of children lost during pregnancy. It was completed in 2012, and sits within the grounds of the Royal Oak Burial Park, a cemetery in Victoria, British Columbia.

The garden was designed by Canadian landscape architects Bill Pechet and Joseph Daly. 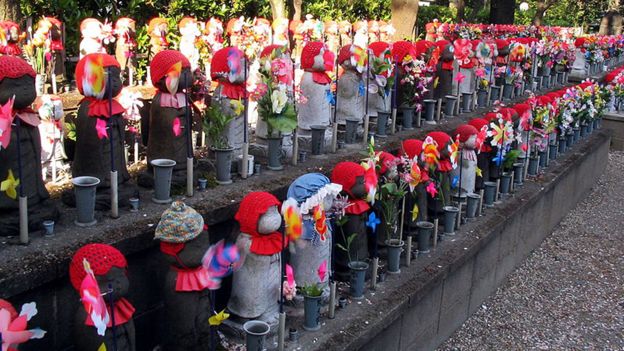 The inspiration came from Bill Pechet's time in Japan, where he lived for two years. While there he was struck by a Buddhist tradition known as Jizo - the practice of creating a small, votive statues to mark the death of a child.

These are usually placed in temples, which have cemeteries attached to them. During festivals they are adorned with clothing, typically little bonnets woven by parents, and they are all brought out together to form a pageant.